Baby is an evil machine mutant created by Dr. Myuu. He was created to kill all the remaining Saiyans so the Tuffles can have their revenge. Also Baby was created to rebuild the Tuffle race. He was first seen at the beginning of the Baby Saga in a giant test tube on life support but almost died because of Trunks cutting off his life support and redirecting it to the plumming system. But he somehow survived, but was thought to be killed by Goku, Pan, and Trunks but took over Dr. Myuu the entire time. After Dr. Myuu escaped, Baby popped out his body, blowing a hole in him. Through out most of the Baby saga, he's been hiding in people's bodies until he got to Earth. Once Baby was on Earth, he took over Goten and Gohan then went to take over Vegeta. When Baby Gohan went to confront Vegeta and Bulla, Vegeta threw Bulla into the car and told her to leave. Then, Vegeta fought both Gohan and Goten but Baby got into many of Vegeta's cuts and slowly but painfully took him over after he almost killed Goku, Goku turned into a Golden Great Ape. Soon, Goku took control and turned into a Super Saiyajin 4 and dominated Baby until Baby turns into a Golden Great Ape but lost again. He is the main villain in the Baby Saga of Dragonball GT. He wasn't seen again in any Dragon Ball series as noticed in the episode: Baby put to rest.

Baby is single-minded in reviving the Tuffle race and destroying the Saiyans. He has extreme cunning enough to posess Vegeta and restore the Tuffle planet.

Baby can liquifiy himself to enter a cut or scrape in his targets skin and control them. Baby can also put mind controlling seeds in people except Majin Buu or Majuub, because they have complete control of their bodies. 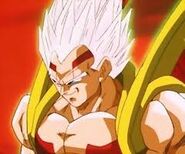