'While training our Kaioken, we decided to master it at the most fundamental level. We had to start from the lower multipliers though and work our way up, learning to master our ki in the process. But after a while, we finally got it down." Kagyu ~ Dragon Ball Oblivion

Expert Kaio-ken (Meijin Kaioken) - also known as the Complete Kaio-ken, is a variation of the Kaio-ken technique, in which the user trains their body to significantly reduce the bodily damaging effects of the technique.

This form contains the same advantages as the Kaio-ken technique, such as increased strength, speed, senses, and base power level. However, this form differs in that the user's body becomes able to wield it without any of the damaging side effects that normally afflict the user. The aura is also different, in that it is more confined to the user's body, rather than bursting outward in the typical fashion. There are two states to this, with the first state causing the user's skin to take on a crimson hue, and their muscles become taut with ki. In the second state, the user's body becomes surrounded in a crimson glow, and their muscles ripple with the additional power, giving the user an appearance to that of the Super Saiyan Grade 2 transformation.

In Dragon Ball Oblivion, this technique is heavily favored by the Namekian warriors Kagyu, Cargot, Maima, and Tsumuri, who are much more able to adapt to the technique's harmful effects due to their Namekian regenerative abilities. Because of this, the Namekians are able to use the technique to a slightly greater degree than Yamcha and the Okurian prince, Lupine. However, because this is a technique and not a transformation, Lupine and (later) Yamcha are able to combine it with their respective transformations, the Beast and Hyper Human forms. There are two methods used to obtain this technique, the first being through extensive training sessions under high gravity (at least higher than 10x gravity), and the second being advanced ki-control mastery. The two can be used in combination with one another, which results in significantly less ki and stamina drain.

By cycling their amplified ki throughout the body on a consistent basis, the user is capable of remaining in a constant Kaio-ken state for a lengthy period of time. By doing this, the user is able to negate the damaging effects of the Kaio-ken, and is also better able to handle the technique at increased multipliers. The user also receives notable increases in their overall ki, though this takes an extended amount of time. Yamcha compares the concept of this technique to performing isometrics with one's ki. Once achieved the user is able to wield the Kaio-ken at low multipliers with near unnoticeable strain. Yamcha, Lupine, and the Namekian warriors accomplished this task during their respective time training the Namekian Room of Spirit and Time, with Yamcha stating that he achieved this through increasingly lengthy meditation sessions, lasting as long as 3 days. However, while the technique doesn't cause as much physical damage to the body as the original technique does, stamina drain is still a factor that effects the user. Thus, prolonged abuse of this technique can cause ki burnout within the individual, particularly when used with other intensive ki-draining techniques.

The power of this technique is dependent on the specific multiplier used, similar to the original Kaio-ken. The energy output of both states is noticeable, with the first state increasing the user's power to the same amount as an x4 Kaio-ken. While the second state increases the user's base power by the same amount as an x5 Kaio-ken. This also enables the user to better utilize higher levels of the Kaio-ken, up to the x20 on a more consistent basis. In the Dragon Ball Oblivion series, while the Namekian warriors are able to wield Kaio-ken at much higher levels more easily, Yamcha and Lupine are capable of combining the Expert Kaio-ken with their respective transformations, Hyper Human(Terran mode) and Beast mode, thus boosting the power of each form.

While utilizing his Beast mode transformation in combination with the Expert Kaio-ken, Lupine is able to match Turles, who was in Super Saiyan form after having consumed fruit from the Tree of Might and trained for six months. After obtaining the Hyper Human transformation, and combining it with the Expert Kaio-ken, Yamcha is initially able to fight on par with Coola, who was not only in his fifth transformation but had also been empowered by consuming fruit from the Tree of Might. After multiple bouts of extensive training in the gravity room, and having their potential unlocked by Grand Elder Moori, the Namekian warriors Cargot, Kagyu, Maima, and Tsumuri, become strong enough that, when utilizing this technique, they are capable of fighting against the Galaxy Pirates Bojack, Bido, Bujin and Kogu.

Later, after returning to Earth from his journey through space, Yamcha uses this technique to defeat both Krillin and Tien Shinhan. After reconciling with his friends, he eventually teaches this technique to both men, helping them increase their strength to catch up to their Saiyan allies.

In the Dragon Ball Rebirth series, Piccolo trains to master this technique during the seven years of peace after Cell's defeat. Because of this training, he is capable of matching both Goku and Vegeta in their Super Saiyan 2 transformations, as well as surpassing Gohan (who had not trained much due to focusing more on his scholastic endeavors) in his Super Saiyan 2 transformation. Later, after his fusion with Kami, his use of this technique enables him to fight on par with Super Boo, giving both Goten and Trunks enough time to complete their training in the Room of Spirit and Time.

Power increase: 4x-5x user's base power level (can be pushed to 10x among Namekians due to high-intensity gravity training & their natural regenerative ability) 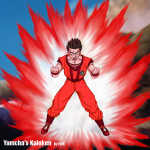