On an early morning a young Naruto Uzumaki walked through the world of Dragon Ball.

"I must defeat this Goku guy!" exclaimed Naruto. "But where is he?!"

Naruto traveled all over the place and then found Goku training in the grass fields.

"Yeah, uhh, I guess so," said Goku giggling with an innocent smile.

"I must defeat you, so I can prove myself to be Hokage!" yelled Naruto.

"Ha ha, what's a Hokage and is there any need to yell every time you talk?" asked Goku.

"Dont change the subject, I must defeat you!" Exclaimed Naruto.

"Well ok then lets get this fight started," said Goku.

Naruto took off his Scroll, ready to fight.

Twelve shadow clones appeared seemingly out of nowhere. Naruto and the clones rushed to Goku in an instant.

"What?! You can clone just like Piccolo?!" yelled Goku. He was slightly caught off guard for a mere moment before swiftly reacting.

Goku hopped over the first clone kicking it in the back of the head slamming its face into the grass, as it then dispersed into smoke. The second clone charged at Goku from behind before Goku spun around backhanding the clone into the grass as well disipating as quickly as the first did. Goku round house kicked defeating two clones, then tripped two other clones then punched them both causing them to disipate away as well. The other 4 clones jumped at Goku head on attempting to dog pile him, but Goku released a quick burst of ki blowing all four away and defeating them.

"Wow those clones were tough," said Goku with a big smile and a small sigh of relief.

Naruto came from underground and uppercutted Goku in the chin launching him into the air then quickly jumped up and kicked him back to the ground.

"I guess you got me there," said Goku with a cough.

Goku got back up and threw a punch at Naruto's face, but Naruto quickly dodged and went off to attack from a greater distance then charged in with a swift punch. Naruto thinking he had Goku got his fist caught and was then thrown back into a small field.

Naruto bounced off his hands and landed on his knee, then charged back at Goku with a rasengan. Goku quickly shot a Ki blast and Naruto but naruto was quick enough to use a substitution jutsu and then reappeared behind Goku.

Goku turned around and countered it with a ki blast but was a second too late and Naruto along with Goku were sent flying.

Goku got back up and got up and prepared for another assault.

"Wow, your pretty strong," said Goku with a brused face and a smile.

"That's right! And one day im going to become the strongest! Believe it!," shouted Naruto with a smirk.

Goku used instant transmission to get above Naruto while he was talking and kicked him on the top of his head, knocking Naruto straight to the ground creating a small crater.

"But i would'nt let your guard down." "he he" said Goku smiling.

Naruto got up wiping blood off his mouth and smiling.

Naruto threw a demon wind shuriken and Goku dodged easily but the shuriken transformed into a clone. Then the clone threw a kunai. Goku senced this and turned around to counter, he caught it but Naruto threw a second kunai impaling Goku in his shoulder.

Goku spun back around and Naruto was with his clone creating another Rasengan.

"Another one huh," said Goku quietly.

Goku slid under Naruto and the Rasengan and kicked Naruto in the back throwing him to the ground. The Giant Rasengan fading away.

Naruto fliped back up and kicked at Goku but Goku quickly caught it and threw Naruto up and went for a critical hit.

"You forced me to use this!" exclaimed Naruto. "Sage Mode!"

Goku saw the power in Naruto as he charged towards him. The Ma and Pa toads appeared on Naruto's shoulder and blasted Goku back. Naruto followed up the attack with a Rasengan Barrage with another clone.

Goku went Super Saiyan and charged at Naruto. Goku jumped over Naruto's attack and threw him. But it was just the clone.

"Damn, Not even Super Saiyan is strong enough for him," said Goku. "With his toads he really is too powrfull. I guess I'll have no choice but to accend to super saiyan 2!"

Goku went Super Saiyan 2 and then the true battle began.

Both Naruto and Goku charged towards each other in a high speed assault. The toads Ma and Pa appeared again and blasted the sound but Goku countered with Ki blast. Naruto and Goku both jumped back from the battle temperarely.

"I guess it's Monkey versus Toad," said Naruto.

"I guess so," said Goku smiling.

Goku sent a ki blast at Naruto, Narutoquickly summoned a clone to block. The toads Naruto summoned smashed down on Goku but Goku was quick enough to dodge each attack with little effort. Then Goku jumped into the air and Dashed through the toads. While he was in the air he then started his Kamehameha. With quick, powerful charge he blasted it at Naruto.

Naruto through the Rasen Shuriken at Goku and the Kamehameha and Rasengan collided. Both attacks destroying each other and both of them with so much power caused a massive explosion destroying the forest in which they were battling in.

The explosion cleared and both of them were seen lying in grass field incopassitated with goku in base form but Naruto in Sage Mode.

After the dust from the collision was completely cleared Naruto awoken.

"Ughh" Naruto groaned and then looked around.

"Right here!" Yelled goku in the sky with a huge ball of energy growing above his head.

"What is that?!" Asked Naruto confused and concerned.

"This is my trump card." said goku with a smirk. "Genki Dama!"(Spirit Bomb)

Naruto was concerned and worried, he knew by the fight elier that this would be no joke.

"AAAAhhh!" Goku screamed and threw the Genki Dama down to the desolite field in which Naruto was standing in all alone.

Sudenly, a huge beast apeard before Goku confusing him long enough for it to charge it's own attack.

Then both yelling at the same time, " Tailed Beast Bomb!" "AAAhhh!" 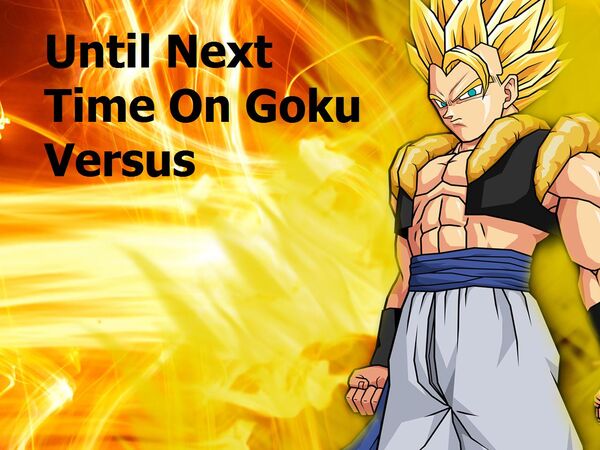 Retrieved from "https://ultradragonball.fandom.com/wiki/Goku_vs._Naruto?oldid=222713"
Community content is available under CC-BY-SA unless otherwise noted.