Kaio-ken (界王拳, "Fist of the World King" or "World King Fist") is a fighting technique invented by King Kai; however, Goku is the only person ever able to successfully use it. It is a technique that multiplies the user's ki for a "heart beat", enabling them to inflict serious damage to opponents who are considerably stronger than them. After the introduction of the Kaio-ken, it became one of Goku's signature attacks; however, it became greatly overshadowed by his ability to become a Super Saiyan later on in the Dragon Ball manga and animated series. While in the state, the ki aura's color becomes crimson.

As a result of the Kaio-ken, the user's base power level, strength, speed, and senses greatly increase for an instant. The only change produced by the basic Kaio-ken to be quantified in the series is that it doubles the user's power level.[1] As the series progresses, Goku demonstrates the ability to heighten the effect of the Kaio-ken to increasingly higher multiplications. There is an inconsistency in that Kaio-ken and Kaio-ken x2 appear to have the same effect, despite Goku considering the latter to be the more powerful buffer. Despite this, Kaio-ken x3 and above all consistently multiply the user's power level by the respective multipliers.[2][3]

When Goku first mastered the Kaio-ken, the furthest he could handle was the Kaio-ken x4, but through training at 100x gravity and then later with his dramatic strength increase after his fight with Captain Ginyu, he was able to withstand astounding multiplications of the Kaio-ken technique, such as Kaio-ken x10. The highest multiplication for the Kaio-ken ever seen was the Kaio-ken x20, which Goku used against Frieza. The technique, however, has its substantial flaws. If the user multiplies their base ki too much, the uprise of ki could easily obliterate them, or severely damage their body, as it did Goku's. After using the Kaio-ken x4 to overpower Vegeta's Galick Gun, Goku's entire body was thrashed, and he could barely move without hurting himself. Even one friendly slap on the back from a gracious Yajirobe caused Goku to scream out in agony. King Kai tried to master this technique himself but failed and taught Goku instead.

Uses of the Kaio-ken

The first time Goku used the Kaio-ken was in the Saiyan Saga when he used it to catch up with and cripple Nappa before he could kill Gohan and Krillin with his Break Cannon mouth blast. Later, while Goku started to battle Vegeta, he realized he could not defeat Vegeta even with the Kaio-ken and powered up to Kaio-ken x2 and later x3, raising his battle strength to over 24,000 and overpowering Vegeta. To prevent Vegeta from destroying the Earth with his Galick Gun, he used a Kaio-ken x3 Kamehameha, a combination of the Kaio-ken x3 and the Kamehameha, in an attempt to save himself and the Earth, initiating a Beam Struggle. When both of their attacks proved unable to overtake the other, Goku used the Kaio-ken x4, surging through Vegeta's Galick Gun and blasting him into the sky.

Goku also used this form briefly when he fought Vegeta's Great Ape form, but was whipped aside by Vegeta's tail, surprised at Vegeta for remaining as agile as ever even in the huge size of the Great Ape transformation. Later, in the Frieza Saga, when Goku fought Captain Ginyu, he demonstrated his Kaio-ken in a prolonged way, increasing his battle strength to a power level around 180,000, thus shocking Ginyu and Jeice. After being healed in the rejuvenation chamber following his attack from Vegeta when Goku himself had switched bodies with Ginyu, Goku battled with Frieza using a Kaio-ken once again.

After realizing Goku was stronger than the others he had battled from Ginyu to Piccolo and the rest and even Vegeta, Frieza used 50% of his maximum power, which gave him an enormous power boost. According to Tien and King Kai in the manga, Goku was using Kaio-ken x10 throughout the fight, to even have a chance at battling Frieza, but even this was not nearly enough. Goku then attempted to use the Kaio-ken x20, which very briefly gave him speed and power enough to strike Frieza, setting him up for a Kamehameha wave, which Frieza amazingly held off with one hand before taking the full extent of the blast. Unfortunately, though showing physical signs of being harmed, Frieza was barely hurt by the attack. He did however appear shocked by Goku's power, remarking that there was "something strange" about him and wondering how a Saiyan could have such "incredible power". The attack left Frieza feeling somewhat threatened, as he remarks to himself that he "must take him out now!" A short time later, Goku eventually transforms into a Super Saiyan, which greatly overshadowed the Kaio-ken.

Goku's battle against Frieza is the last time the Kaio-ken is used in the manga, as the introduction of Super Saiyan outclassed it. However, in the anime filler fight against Pikkon, Goku uses a Kaio-ken and Super Saiyan combination (something he calls a "Super Kaio-ken"), which gives him an incredible power increase. Because of this one instance, it appears that Goku can also demonstrate the Kaio-ken's usability in transformed states, which potentially means he can make his transformed forms many times stronger. However, it can be argued that using Kaio-ken in transformed states could seriously weaken or even kill him. This is evident in that the already-dead Goku is exhausted after performing the technique for only a few seconds during his fight with Pikkon.

Goku uses the Kaio-ken technique to battle the villains in DBZ movies 2-6.

In Dragon Ball Z: The World's Strongest, he first uses it to deflate the bio-warrior Misokatsun. He uses it again soon after to free himself after being frozen solid by Ebifurya, and then easily takes out both Ebifurya and Kishime with it. He later uses the Kaio-ken x3 to attack Dr. Wheelo's giant robotic body and succeeds in breaking off Wheelo's right arm. The two then engage in a Beam Struggle similar to the one Goku and Vegeta have in the Saiyan Saga, and, just like in that struggle, Goku overcomes Wheelo's blast by using the Kaio-ken x4.

In Dragon Ball Z: The Tree of Might, Goku first uses the Kaio-ken to avoid getting hit by the Great Ape Gohan, but is eventually knocked down by him. He later uses it to take out Turles' henchmen. After Turles becomes more powerful with the fruit from the Tree of Might, Goku uses the Kaio-ken x10 (Kaio-ken x20 in the FUNimation Dub) to attack him, but is still unable to keep up.

In Dragon Ball Z: Lord Slug, Goku uses the Kaio-ken to rip a hole through the giant Lord Slug, after he gains some of Piccolo's power.

In Dragon Ball Z: Cooler's Revenge, after Cooler transforms and becomes far more powerful, Goku uses the Kaio-ken to attack him, but has no success. Cooler even flies through Goku's Kaio-ken Kamehameha combo.

In Dragon Ball Z: The Return of Cooler, Goku again uses the Kaio-ken on Meta Cooler, but it again proves far too feeble, forcing Goku to go Super Saiyan soon after.

In Dragon Ball Z: Supersonic Warriors, in Krillin's "What-If" story, after dying of the heart virus, Goku (with Fortuneteller Baba's help) returns to teach the Kaio-Ken and Spirit Bomb techniques to Krillin so he can protect the Earth in Goku's place. Krillin can use these techniques in his level 3 form.

In the computer game Dragon Ball Online, which is set in Age 1000, it is said that between the end of the original manga and the start of the game, King Kai taught the Kaio-ken skill to the inhabitants of Earth. This includes Humans who since the manga's end have began practicing different forms of martial arts, and the Namekians who fled to Earth after their planet was destroyed by Miira. The Majin race, who were not taught the technique, managed to learn it through mimicry. as such, the technique is obtainable by all three of the game's playable races.

The skill is learned by every class at level 35. The appearance and effects in the game are similar to how it appears in the anime: activating it engulfs the player in a flaring red aura. The self buff increases the players' movement speed, allowing them to run faster while traveling the environment, as well as their attack speed, chance of critical strike, and maximum attack power while in combat. During its use, both the player's LP (life) and EP (power) are drained and the skill cannot be deactivated manually, but instead deactivates itself when HP is considerably low. Kaio-ken also has a six-minute cooldown period.

The Kaio-ken technique can be amplified over x20, as never seen in previous uses by Goku in the original series. The only increase that comes with multiplying the Kaio-ken buff is the chance of critical strike; for example, activating it doubles the player's critical strike, and the following multiplication would put the increase at x3. Due to it being accessible to all races and classes, it can be used to increase the strength of trademark techniques other than the Kamehameha, such as Special Beam Cannon, Wolf Fang Fist, Destructo Disk, and Big Bang Attack. 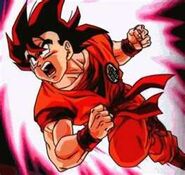