Super Saiyan 2 (超サイヤ人ツー, Sūpā Saiya-jin Tsū) is the direct successor to the first Super Saiyan transformation. It is very similar to the original form in appearance and attainment, however the power output is far greater, as speed, strength, and energy output all drastically increase. Gohan was the first person to advance to this transformation while battling Cell.

In order to achieve this transformation, the Saiyan must first gain a huge amount of energy (usually by training), far beyond that required for the first Super Saiyan form. Once enough energy is acquired, the Saiyan must experience a powerful emotional upheaval, much like the Super Saiyan transformation, but to a greater extent. Because of the intense emotion required to initiate the transformation, any mastery of the Full-PowerSuper Saiyan state, and mental stability attained therein, is negated, and the naturally remorseless nature of the Saiyan race is magnified, requiring them to remaster the personality changes. Even the gentle, polite Gohan becomes a hotheaded, merciless fighter after transforming, opting to torture Cell rather than kill him despite Goku's pleas. The power output emitted by this form is greatly increased as well, as it doubles the strength of the regular Super Saiyan transformation, as stated by the Super Perfect Guide.

The golden hair brought on by the original transformation becomes longer and rigid; most of the hair that hung loose in the Super Saiyan transformation (in the case of Goku or Gohan, because Vegeta lacks any bangs in front of his face, as does Gotenks) is now raised. Increased energy radiation causes the aura to take on a jagged, fierce flame-like appearance rather than smooth or flowing and gain an electrical field. Because the energy output and radiation is higher than that of any Super Saiyan, the aura pulses at a higher frequency, like the type 2 aura, at least in the manga. Muscle mass is barely increased, but energy output is multiplied manyfold; such that greater amounts of the Saiyan's increased energy capacity can be used at once for much more powerful energy attacks, and even speed is augmented incredibly by the boost, unlike the Ascended and Ultra Super Saiyan states which cause the muscle mass to swell and thus slow down the user. Another notable feature of the form featured in almost all Dragon Ball Z games and some scenes of the show as well as pictures from the manga, is the electrical aura, many electrical sparks (normally blue, gold in Dragon Ball Z: Budokai 3) that constantly surround the body, especially when charging up. However, they aren't always present (especially in the anime; Gohan and Vegeta aren't the only ones who lack the trait completely in some episodes), and some fans sometimes mistake a charging Super Saiyan for a Super Saiyan 2 due to the lightning sparks, such as for Vegito (in the manga, they never reappear in his aura after his final transformation, nor are they ever shown on any other first-level Super Saiyan).

According to Goku's flashback, Gohan technically first transformed into this form during their training in the Hyperbolic Time Chamber, though he was too exhausted to mantain it. This is the reason why Goku knew about this power before Gohan transformed into it during his fight with Cell. The Super Saiyan 2 form was first seen completly achieved by Gohan after witnessing the Cell Juniors' attack on the Z-Fighters and Android 16's death at the hands of Perfect Cell. The power of the Super Saiyan 2 form skyrockets far beyond the power of the Super Saiyan, Ascended Super Saiyan, Ultra Super Saiyan, and even Full-Power Super Saiyan forms. Perfect Cell and Bojack, who could both easily dominate those in the Ascended and Ultra Super Saiyan forms and were somewhat stronger than Full-Powered Super Saiyans even without accessing their full strength, were easily slaughtered by Gohan in his Super Saiyan 2 form. In addition, when Perfect Cell produced seven Cell Jr's., each of the Z Fighters were unable to fight evenly with even one of them (including Goku, Vegeta, and Future Trunks, but the former was exhausted from his previous fight with Perfect Cell himself). However, when Gohan fought the Cell Juniors in his Super Saiyan 2 form, he killed all of them effortlessly on his own in simple, single blows, and was unaffected by their most powerful attacks.

Gohan proceeded to fight and severely injure Perfect Cell with just two punches, even after the android unleashed his full power. However, in a Kamehameha

struggle against Super Perfect Cell, Gohan had a very hard time due to having his left arm broken by Super Perfect Cell's attack when he defended Vegeta after he attacked the Android to try to avenge his son's death (a blast which was stated to reduce Gohan's power output to less than half its normal amount). It was only a little help from Goku and Vegeta that Gohan needed to summon enough power to destroy Super Perfect Cell.

Seven years after the Cell Games, Gohan demonstrated the Super Saiyan 2 transformation thrice; to Kibito at the World Martial Arts Tournament, during his battle against Dabura and in a failed attempt to escape from Majin Buu together with Supreme Kai, the latter two being explained by Vegeta that Gohan's Super Saiyan 2 form was much weaker than when he fought Perfect Cell due to his lack of training.

Following the events leading up to Majin Buu's revival, Vegeta (after becoming a Majin by Babidi's spell) fought evenly matched in their Super Saiyan 2 states achieved some time after the Cell Games. Vegeta will remain in this form during the battle with Majin Buu. The power of Majin Buu is shown to far surpass the power of the Super Saiyan 2 form; Vegeta inflicted little damage to the monster, and even after he expelled all of his energy at once in a devastating suicidal explosion, Majin Buu managed to fully regenerate after some time. Goku later demonstrated the Super Saiyan 2 transformation to Babidi and Majin Buu before advancing to the new Super Saiyan 3 transformation.

When Vegeta returned to Earth from Other World (with the help of Fortuneteller Baba), he and Goku fought Super Buu in their Super Saiyan 2 forms. However, due to the massive power he achieved from absorbing Gotenks, Piccolo, and Gohan, Super Buu's strength easily outclassed Goku and Vegeta, reverting them back to their normal states. It wasn't until

Goku finally convinced Vegeta for both of them to wear the Potara Earrings so they could fuse into Vegito, giving them enough strength to easily dominate Super Buu. After defusing back while absorbed by Super Buu, Goku and Vegeta battled as Super Saiyan 2s against the thoughts of Gotenks, Piccolo and Gohan, and later against Super Buu in its head, after which they remained in this form all the way till the fight with Kid Buu on the Sacred Kai Planet, where Goku fought Kid Buu on Supreme Kai's planet. Kid Buu was not using its full power as Goku is able to match him at first, but he chose to advance to the Super Saiyan 3 level, stating that he won't have a chance to beat him without using full power. When Goku started to lose energy, Vegeta fought in his place using the Super Saiyan 2 form so that he can buy time for Goku to get his energy back, during which he fell to Kid Buu's full power and was beaten back to base but will not give up, and continued the battle by transforming many times.

Furthermore, during Dragon Ball GT, Gohan and Vegeta used the Super Saiyan 2 form from time to time during battle. Gohan used this form in an attempt to stop Goten, who was infected by Baby, to destroy the planet, only for himself to get infected instead. Baby-infected Gohan use this form again to fight Vegeta, who also used the Super Saiyan 2 transformation, as well as Piccolo and Goku on separate occasions. Gohan and Vegeta also used this form when fighting against Super 17 and on a desparate attempt to help Goku against Syn/Omega Shenron.

where the Z Fighters were struggling to combat Bojack and his henchmen. After being saved from Bojack by Goku (who used Instant Transmission to teleport to Earth) and hearing his father's words of encouragement, Gohan tapped into his Super Saiyan 2 powers and defeated Bojack and his henchmen in a matter of minutes. Gohan also used this form to battle Broly when the latter reappeared in Broly: Second Coming, and despite

putting up a far better fight than he did previously, he was outstripped by the Legendary Super Saiyan's massive power. However, this was partially because of Gohan's lack of training that made him noticeably weaker up to that point, and since Broly survived being punched in the stomach by Goku in Broly: The Legendary Super Saiyan, Broly's power most likely increased substantially after recovering from near-death (as all Saiyans do). Though, to Gohan's credit, his blows managed to inflict a noticeable level of injury to Broly (whereas nobody in Broly's first appearance could damage him in the least), as Broly was knocked back when he was kneed in the face by Super Saiyan 2 Gohan. 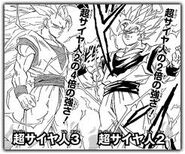 SSJ2 With SSJ3 in Kazentai